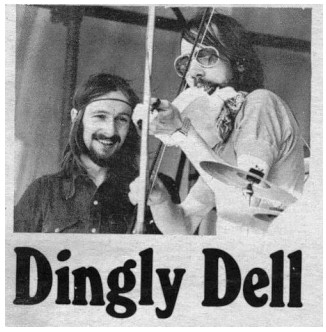 Next week, LINDISFARNE and YES will be playing songs from their new LPs at the Crystal Palace. Here, MM presents an exclusive preview of the two albums.....

SOMETIMES, just occasionally, the ears pick up on a piece of music that commands a silent respect from the opening chords to the closing note on the first hearing. It happened to me when I first heard A Day In The Life, and it happened again when I heard Simon and Garfunkel's Bridge Over Troubled Water for the first time. And it happened again last week when a man from Charisma played me the new Lindisfarne album and, in particular, the title track Dingly Dell. Sympathetic though I am towards Lindisfarne, I really wasn't prepared for that trip into Dingly Dell, wherever it may be. Take a tip: when you buy the album play this track first, turn the volume up loud and listen through cans. You won't regret it.

Like A Day In The Life it comes at the end of the record and includes fast and slow movements. Alan Hull (and this really is Alan Hull's album) sings the melancholy verses over an eerie bass line which could have been recorded by using a bow across the strings. The effect is almost frightening - as if he really was lost in the Tyneside we heard about on their last album. But after two verses there's a total change. Electric guitar brings in violins, 'cellos, violas, string basses, oboes and anything else you can think of… a whole symphony orchestra takes over and gradually fades until the next eerie verse drones in.

It has to be the definitive Lindisfarne track, just as the album has to be the definitive Lindisfarne album. There isn't one poor track, but this stands head and shoulders above the rest. It will be impossible to perform live without the additional instrumentation, but few groups could achieve this sound in a studio, even with the assistance of Bob Johnston as producer.

Johnston is a perfectionist whose technical virtuosity occasionally outweighs his feeling for the music. But even he must be pleased with the outcome of this album, for most of the tracks Dingly Dell being the standout exception generate a funky feeling hitherto unassociated with Lindisfarne.

For openers we have a trilogy of songs all linked together, All Fall Down, which is destined to be their next single, is the happy sing-along type of tune we expect from Lindisfarne. There's a lot of harmonica from Ray Jackson, and a French horn booming away in the background.

It runs into Plankton's Lament, an instrumental jig influenced no doubt by Jimmy Shand, and then we go into Bring Down The Government, a protest type of song which, the group hope, will develop into an audience participation song similar to We Can Swing Together. It's a bit fast for an audience, though, and each member of the band sings a verse in turn. (A lively version of Swing Together, incidentally, is planned as the reverse side of their next single).

Poor Old Ireland is Hull's lament for the Irish, a slow pensive number which doesn't attempt to solve the Irish problem or take sides. If anything, it knocks at the strong religious beliefs held in that country. It's unlikely to cause the same stir that McCartney's song about the Irish situation.

Don't Ask Me is the only song by bassist Rod Clements, and the heaviest number on the album. Thick guitar chords open the number which is way away from the folk/rock bag Lindisfarne have slotted into. Mutually, the group's favourite album of the last 12 months was Sticky Fingers and there's a Stones influence pervading here. It's a song about being a pop star - a subject perhaps too frequently aired by groups, but it'll make you dance all the same.

Oh No, Not Again is the most commercial number of the set. With its easily recognisable riff, it would make a perfect single. The words in the title are chanted behind the verses, not unlike the way the Beatles used vocal harmony in their early days.

Side two opens with a quick harmonica jig called Dingle Regatta by Ray Jackson which slips immediately into another commercial track Wake Up Little Sister. Again the acoustic guitars give way to electric behind Jackson's voice.

There's some offhand chat in the grooves before Simon Cowe's contribution to the album Go Back, another song that rattles along with a slight Stones feel about it. There's more brass including some tuba punches in the right places.

Court In The Act, a song apparently written by Hull as a result of a driving offence he committed and appeared in court for, opens with the famous C'mon Everybody riff. It's another rocker which, I am reliably informed, took, its title from the MM's live review feature.

Mandolin King could have come from the Beatles in their Rubber Soul era. Harmonies chant across the track, and crisp lead guitar is filled out with two mandolins. Another track which could make a single. The closer is the title track which I described above.

The album is undoubtedly Lindisfarne's best yet, and the best on the Charisma catalogue so far. In Charisma's short history their three most successful albums, Lindisfarne's two and the Nice's Five Bridges, (recorded in, and written about, Newcastle), have all come from the North-East. This won't be an exception. Alan Hull can write songs as well as any British songwriter, and here his talents spread into a wider field than the previous Lindisfarne albums.

The change in musical direction gives drummer Ray Laidlaw more work and he takes it easily in his stride. Ray Jackson is at the top of his field in playing both harmonica and mandolin, while his singing takes on a new edge in the faster numbers.

The album will be previewed at Crystal Palace on September 2. The group intend to include all the numbers from the album in their new stage act, and phase out the old favourites. They may rehearse a medley with short excerpts from the oldies as a closing number.

“We have written the album in the style we wanted to go,” says Alan Hull. “We didn't actually decide to get out of the folk bag we were in, but just write Lindisfarne music. And this album really is Lindisfarne music. For years we were a blues band before we joined Charisma.”

The track Dingly Dell, says Alan, was written three years ago at the same time he wrote Lady Eleanor. At the time no-one wanted to hear it, a similar fate which befell Lady Eleanor when first issued as a single. It was the re-release which scored so heavy in the charts this year. We originally recorded it for Fog On The Tyne, and we kept the tape and added the orchestral parts for this album. It's very like Debussy.

“I think this is the best Lindisfarne album, and more to the point the whole band does. The songs are as good, if not better than the first album, and the production is better than the second one. It's a combination of the best parts of the two and very positive. There are no hidden tracks. We tried to make every track different from the one before.”