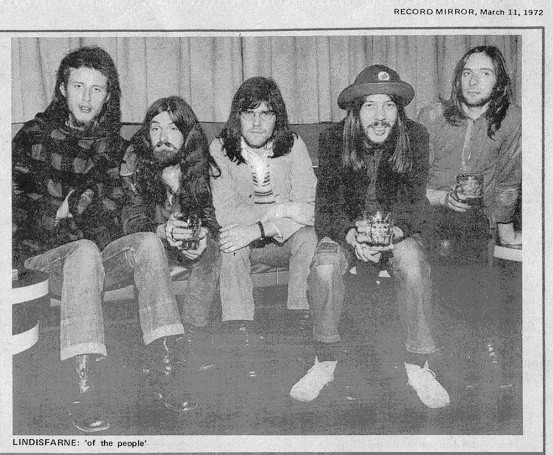 DEFINING Lindisfarne's success is rather like pulling the wings off a butterfly at present but there seems little doubt after having seen them on stage or listened to their albums it has something to do with their apparent vulnerability - they are possibly the first of the great UN-super groups who have based their appeal on being of the people - not perfect and proud of it as their early album titled Nicely Out Of Tune might suggest.

As opposed to coming on strong in the time honoured tradition of big stars they come shambling on and pull off the seemingly impossible by the sheer musical enthusiasm of their amateur-professionalism which escalates into a kind of soft rock knees up at their most exuberant and thoughtful fireside folk meeting at their more placid pace. It is perhaps best summed by one critic who recently referred to them in the category of pub-rock - but definitely The Snug not The Saloon.

And certainly as representative of their music and style as any one individual can be is the self effacing composer-guitarist Mr. Alan Hull whom I recently met at Charisma's London office where he quietly introduced himself as “the worst interviewee in the world”. Certainly not an ego-tripper our Alan but then one would hardly expect extrovert showmanship from the man who wrote Lady Eleanor.

“I'm not sure what kind of influence I've had on the band but I was just a boozy folk singer back in May 1970 when I met them and they were playing rock and blues as Brethren,” said Alan. Jacke (sic) was a real died in the wool R&B fanatic at that time - he had a vast record collection of those musicians.

“They became Danton Faction (sic) for a while and were easily the best hard band in the North East but no one was getting much personal satisfaction out of playing other people's work and everyone decided at the same time it was about time we played and created some sensible music of our own.

“It's very difficult to be objective about our music when you're so involved in it but I think that part of our appeal is that we have kept a sense of perspective over our success by keeping a sense of humour. We've always felt it was more important to enjoy what we were doing than take it so seriously as some of the bigger groups appear to do.
There’s no doubt that keeping our Geordie backgrounds in sight has helped but then that’s not a deliberate thing – it’s just there and comes out in the music as a natural extension of ourselves. Some people have suggested that as we become more successful and move on to bigger audiences we could lose that close communication we have built up in the clubs and halls but I don’t think that is proving true.

“Although the Oval gig was dire for us and we had a lot of PA problems we played Wheeley (sic) to a vast crowd and managed to produce the same kind of rapport with the people we’ve done in small halls. The only danger might be in moving and travelling much more as we become more successful that we find it more difficult to get back to basics. But you don’t stop being what you are because you happen to be in New York and if the travelling becomes a problem you can always write about that. What it really means is drawing from you own experience.

“We're naturally a little concerned with the forthcoming American tour because of much of our act is based upon Northern humour but there's no reason why we shouldn’t adapt to terms they can understand. For example instead of Jacke (sic) doing his little medley of things like Z Cars on harmonica he'll probably try Highway Patrol. Going out with the Kinks who I understand are going over quite big there now should help us enormously.”
Having witnessed a recent Lindisfarne performance where the audience reacted like a football crowd to their performance and brought along their own cow bells, tambourines and whistles I wondered whether Alan felt they might have to curb some of the enthusiasm in order to get across more of their music.

“I don’t think so,” said Alan. “I think we have quite a nice balance at present – I mean they’re not going crazy all the time and we’ve worked a programme of varying tempos and time changes to bring the mood up and down as we want it. Certainly it wouldn’t do us much good to throw a wet blanket over the ‘all join in’ spirit which has been very important in the act – it seems natural to share your own enjoyment in the music anyway.
What will happen on the next Lindisfarne album - do they intend to use producer Bob Johnston whose association with Fog On The Tyne proved so successful?

“We're thinking of giving him another chance,” smiled Alan. “He created a great working atmosphere in the studio which is enormously important for us if we are going to come over sounding as if we are enjoying ourselves.”

Alan has recently been subjected to the BBC’s policy of banning any record which they feel in their opinion makes inflammatory statements on the present situation in Ireland. Alan has written a song called Poor Old Ireland for inclusion on the group’s next album which they are currently performing on stage but which the BBC would not permit to be broadcast in a recent radio programme they did.

“That’s their decision and so one accepts it,” said Alan. “But I think they are wrong about the song, it really is not political in implication because I am not political. It’s really just a comment on a sad situation – in fact from a political standpoint it is rather negative. I wrote it well before the Bloody Sunday situation but it happened to coincide from a performance point of view with that tragedy and I think that the BBC’s decision was coloured by current events rather than anything specific I had to say.”

We finished up holding a brief memorial service for the Newcastle football team recently knocked out by the non league club Hereford and Alan obliged with a brief impersonation of Eric Burden “I’m hallucinating like man mon,” for some reason, before wishing Lindisfarne the best of luck in converting damn Yankees to Newcastle Brown.

A great little band getting better and anyone who thinks different can go to ‘Hull’!