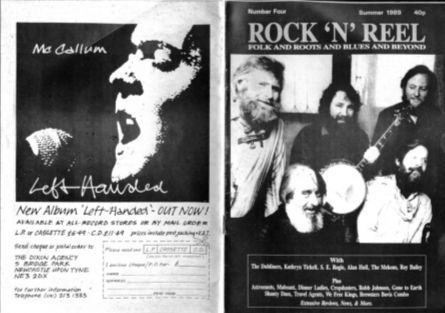 Do all the band undertake solo projects from time to time like Alan’s Another Little Adventure album on Black Crow Records and the solo tour he undertook?

Alan Hull: Apart from myself, Rod Clements does solo tours and records with Bert Jansch - they have an album currently available on Black Crow. Ray Laidlaw and Marty Craggs have a sometime rock band called Pacamax or sometimes Dirt on the Needle, featuring local musos like Jed Grimes (ex Hedgehog Pie) and Billy Mitchell (ex Jack the Lad) now with Maxi and Mitch.

Did you grow up with north-east traditional music and when you were developing your folk rock style in the early 70s did you feel part of the same movement / feeling as what Steeleye Span and Fairport Convention were doing then?

When we formed in 1969, there was a very healthy music scene on Tyneside. The Club A'Gogo was the centre for blues and rock. The Bridge Folk Club was the place for folk and the area had many other smaller places where bands could cut their teeth. I drifted into the folk clubs as they were prepared to listen to new singer / songwriters. That's basically how I bumped into Brethren who had had the same idea as Rod (Clements) and Si (Cowe) were writing original songs.

We eventually teamed up and became Lindisfarne, taking with us blues from the A'Gogo and attitudes we had picked up in folk Clubs. We were certainly aware at the time of the Fairports and the rest but I don't think we consciously felt part of a movement as such. We were too busy gigging!

Do you feel an affinity with what the new generation of acts who fuse rock and folk like the Pogues are doing, and in your own area the Whisky Priests, and do you appreciate the music they produce?

I think the whole band like what the new lot are up to. I especially like the Waterboys and in a sense it's little recognition that ourselves, Fairports, Steeleye and others paved the way for what I like to think of as real music. Good songs without frills and well played and sung.\What can people expect with the new Lindisfarne album, and has the new interest in folk / roots music inspired you to reach out for new influences musically?

What people can expect from the new Lindisfarne album is a set of smashing songs well produced by Steve Daggett. The new feeling in the business for folk / roots music, has, I think, given us an added incentive to succeed with this record. We've carefully selected the material and are reaching out to explore new capabilities within the band. A major one of these has been the emergence of Rod as a mean slide guitarist. We've kept the vocals traditionally Lindisfarne as this is a very recognisable facet of the band. All we need now is a title!

Do you still find people who connect with Fog On The Tyne and do you feel disappointed that some people would judge you on tracks recorded about eighteen years ago, do you sti1l perform the hits from the seventies live and do you feel happy doing them?

We are still very happy to perform the hits like Fog On The Tyne from the early seventies because we still get a genuine buzz from seeing the audience reaction. We've never stood still though and never simply relied on the biggies to carry us through. There has always been a constant input of new material and we have even radically re-structured the way we do the older ones. There is a tendency amongst some people who aren't that well acquainted with the band to think that Lindisfarne is rooted in the early seventies and got no farther than Meet Me On The Corner and Lady Eleanor. But this, as many people know, is miles from the truth - ask anyone who's been to a show! We aim to carry on more vigorously than ever as I feel we're getting better all the time, watch out for the new album and all the best with the magazine.