Barry McKay remembers - 40 years ago today: The flight of the gravy

After a lengthy "Magic In The Air" tour, we were all ready to let our hair down. Circa 50 of us arrived at Mathers Kitchen restaurant after one of the Newcastle City Hall shows, the Chris Rea contingent and crew on one side of the restaurant, Lindisfarne on the opposite side... -I was somewhere in the middle.

There was no sign of any food for quite a long time however the wine flowed and flowed and much toasting went on. Chris Rea can be seen in one of the photos toasting Alan Hull (out of picture) with a carafe of wine held high. Note his clean white T-shirt: 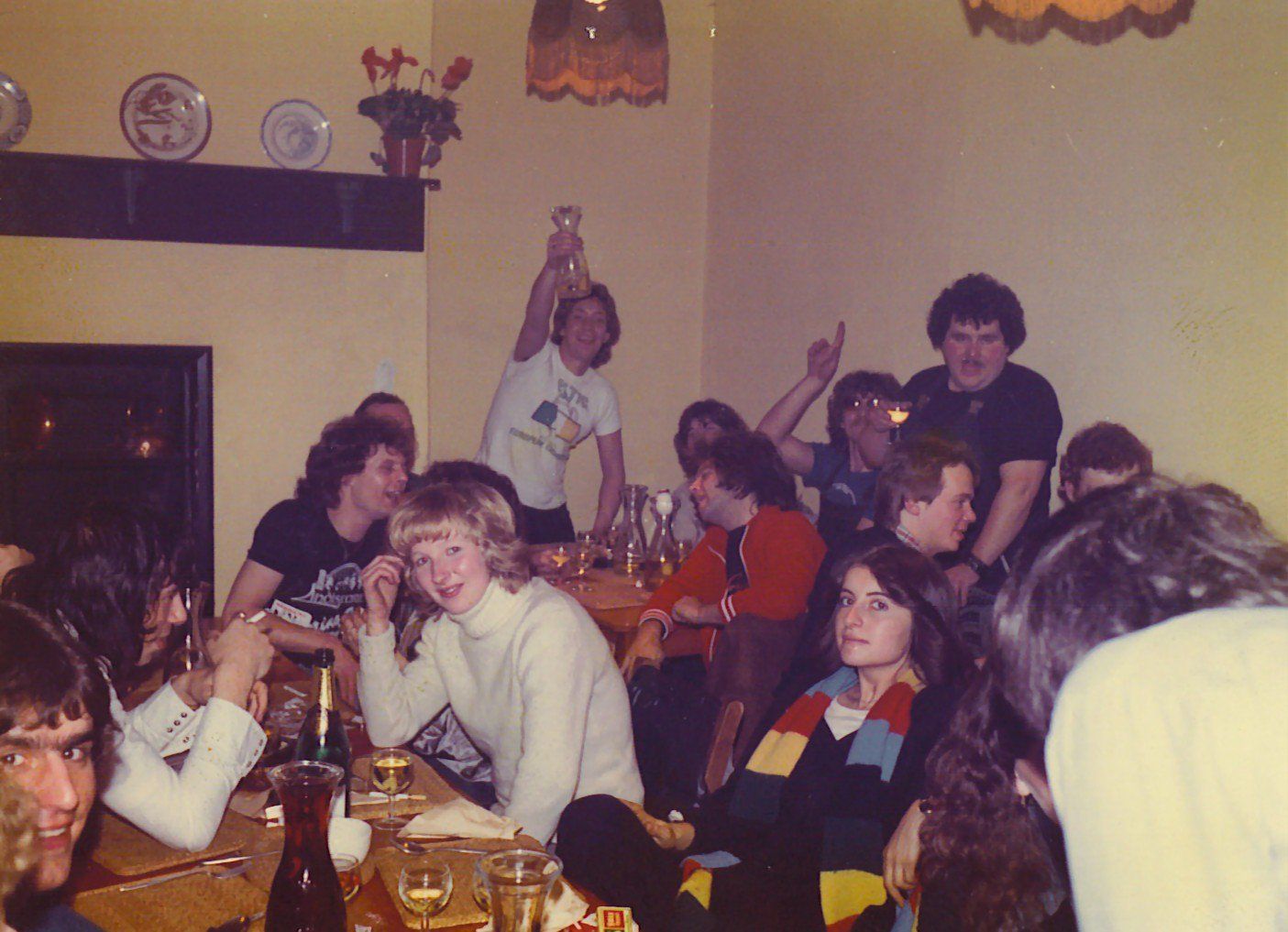 Spirits rose, more wine was consumed but still...no food. With two others I ended up dancing on the table and when we fell over, someone ran over from the Chris Rea party and poured a carafe of wine over our heads. 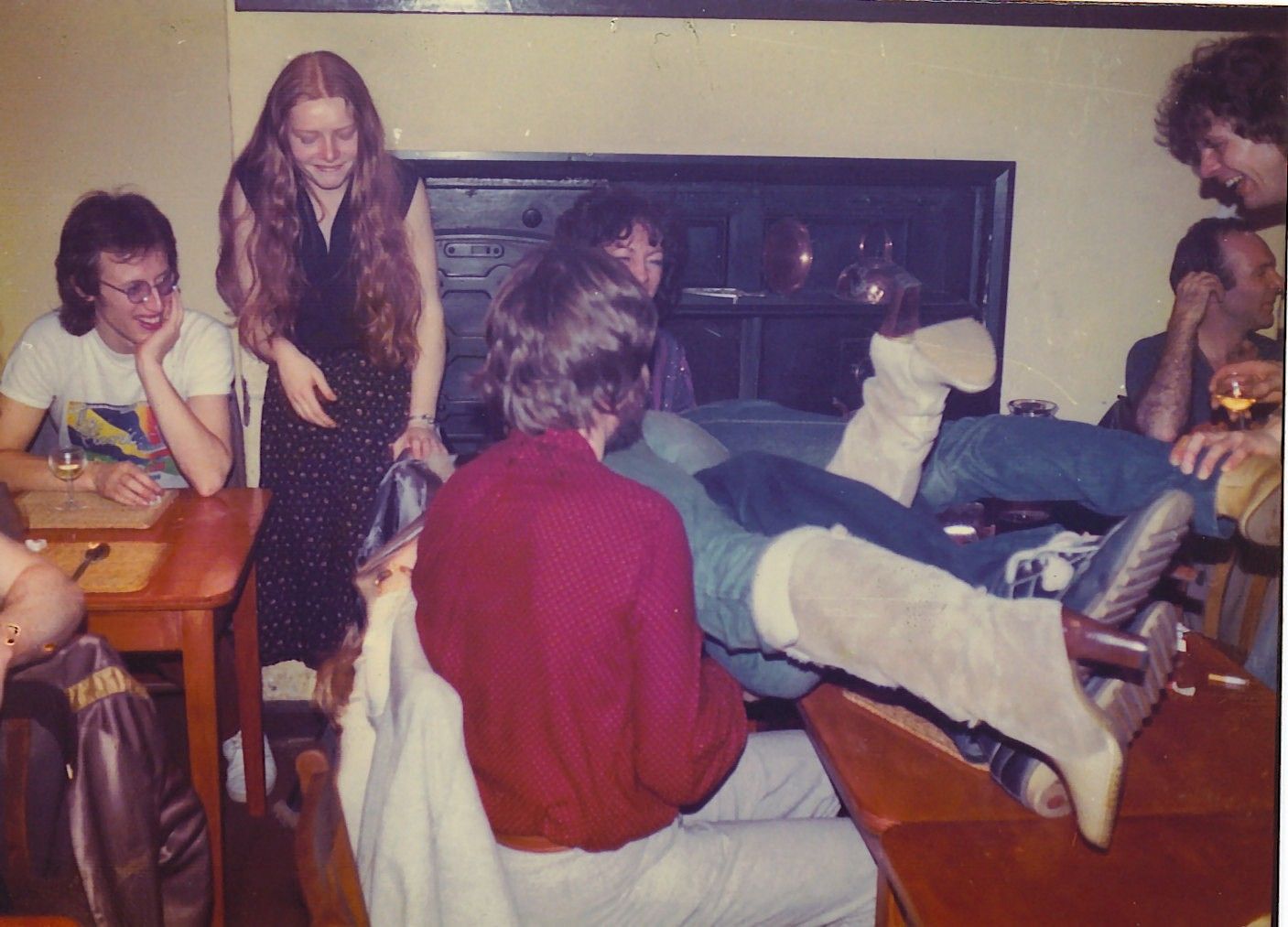 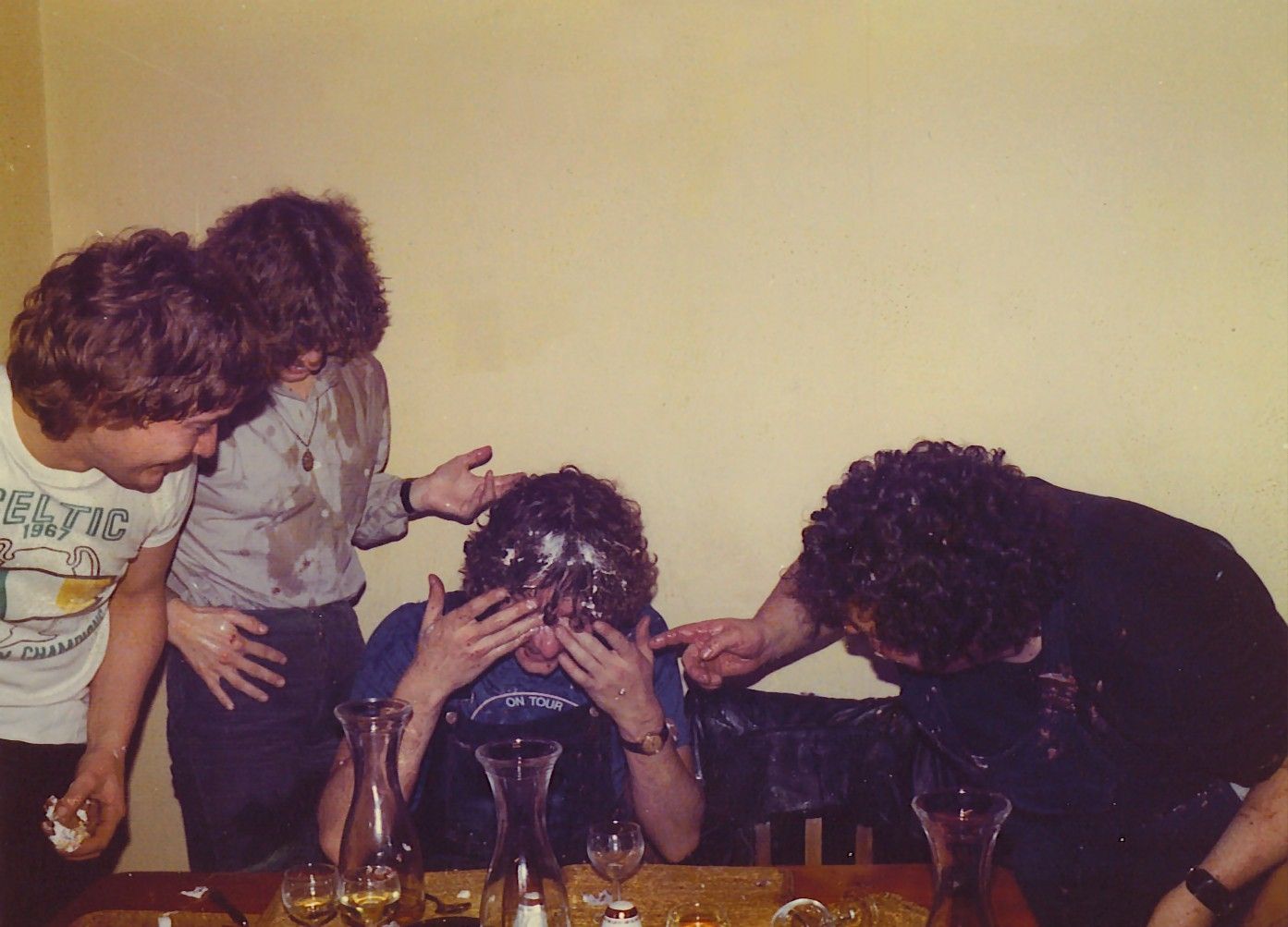 To this day I don't know who carried out this dastardly deed....but Ray Laidlaw was right there, grinning...he probably knows. It seems that there was retaliation from the Lindisfarne side. Bread rolls arrived which became useful missiles. Then, finally, the food arrived. This was the signal for a major food fight. The photos can't do it justice however it was straight out of a John Belushi movie. I recall at one stage that the air space above me seemed crowded with incoming and outgoing food and drink. One photo shows food stuck to the wall behind Chris Rea, who is covered in food and wine while from his right, someone has just launched the entire contents of a gravy jug through the air. 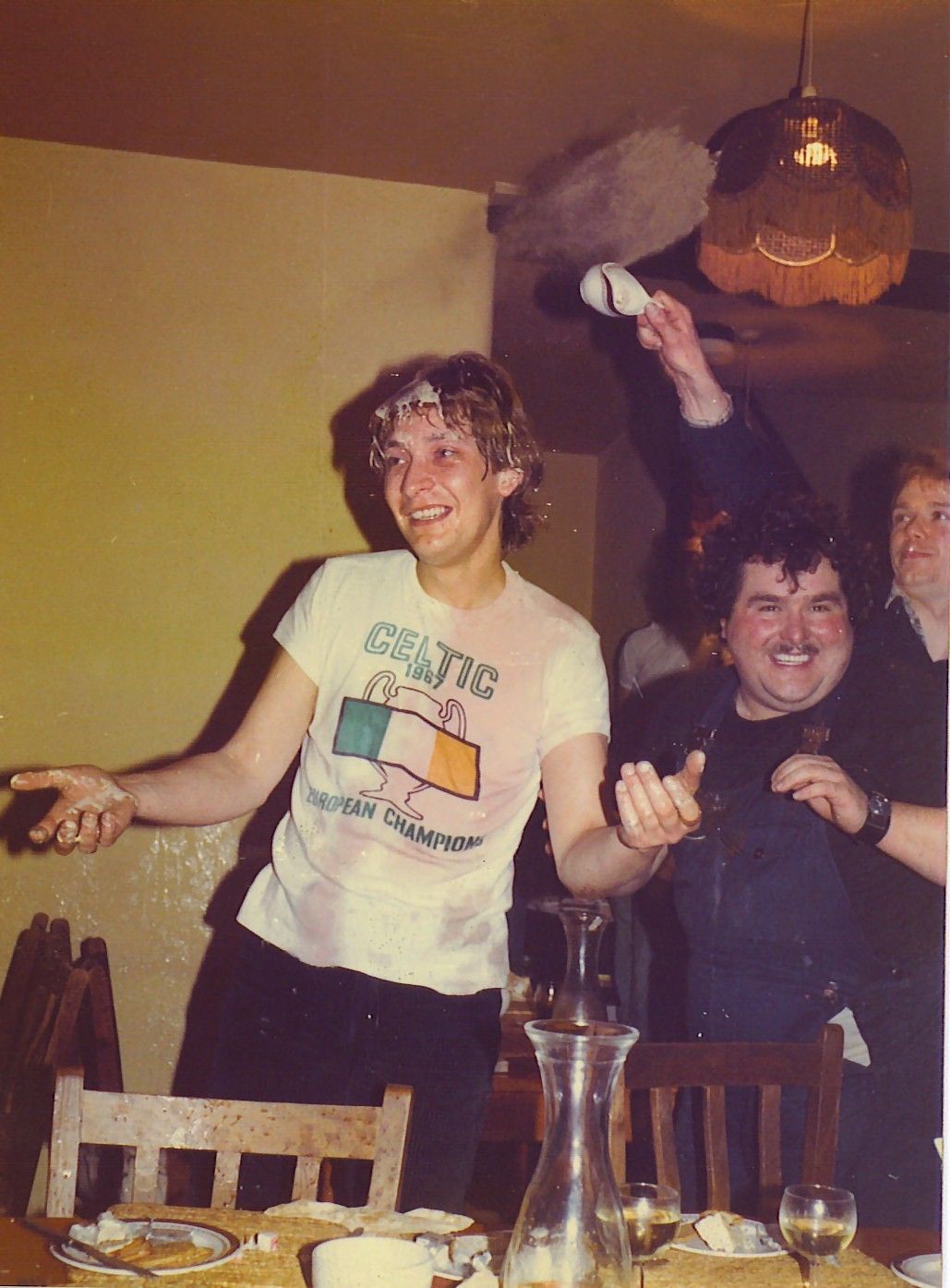 Chris and Co were heavily outnumbered as every bit of food which arrived was deployed as ammunition and directed towards Chris and his merry men. Within minutes, everyone evacuated the premises which by then required redecoration. 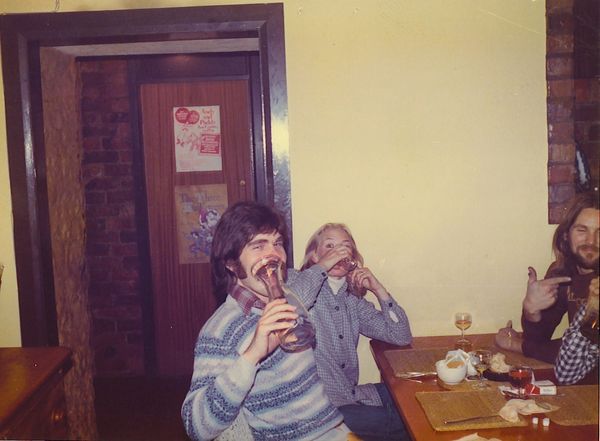 Who's who on the "Flight of the gravy" photos:
The guy grinning, in the bottom left hand corner of the first photo in the series, is Iollo Pierce who, for a short time was the bands road manager. He was very quickly replaced by the wonderful Mr Jimmy Moore, surely just about the best road manager Lindisfarne (or any other band) could have ever hoped to have secured and a terrific guy. Next to Iollo, with long hair, white shirt and elbows on the table, chatting to a blonde girl opposite, is me. Standing at the rear is Chris Rea (left) and one of his road managers (right) with another road manager seated between them. Seated opposite me, with the multi-coloured scarf, was Shwepp's (probably spelt incorrectly) fiance. Shwepp engineered both the first Chris Rea album and "Back and Fourth" as he worked for the late Mr Gus Dudgeon (who I still miss to this day...another great guy who died in a road accident).

Then again, I almost did too. Within a mile of the spot on the A1 near Leeds, where the Social Sec of Newcastle Poly and his colleagues were all killed crossing the centre reservation, I also crossed, doing 100mph when forced onto the grassy central reservation by a car transporter that suddenly pulled out, ending up doing 100mph the wrong way down the opposite fast lane. Total miracle I got back over without a head-on crash! I have a suspicion that the blonde girl I was talking to ended up being killed in a plane crash some years later in South America. Less of this and back to who's who....

Top right in the second picture is, I think, Ian Leake (aka Streaky) who sound engineered for us occasionally (and had a role in the film "Lucky Man" and worked most of the time for Alan Price (whatever happened to Alan Price? hope he is OK, he was very talented but quite shy), I don't recognise the attractive lady to the right of Ray Laidlaw but she looks a lovely person...then I would say that...I married a redhead years later. I think the lady seated to her right may have been Iollo's girlfriend. As for the three pairs of legs belonging to the trio who fell over trying to dance, pissed, on the table...the legs wearing blue "Kickers" are mine, another pair was one of our merchandising ladies (her name will be on the winter tour programme) and the third was the blonde girl who I suspect perished in an air crash.

The third picture is Chris Rea and his road crew. They were always up for a laugh. Chris's Norwegian wife was not about that night, had she been I doubt the food fight would have kicked off. Chris, incidentally, hated Gus Dudgeon as Gus was a bit of an autocrat in the studio. I always thought this was so sad, as without Gus, I doubt Chris would ever have made it. Chris will disagree. Magnet Records' owner...the "Mr Checkbook to the labour party"..Michael Levy, made a great move for Chris when he secured Gus Dudgeon for an unknown's first album. I have always felt sorry for Gus that he received so little appreciation from Chris, but then, I wasn't at the sessions. Gus could spend two days of expensive studio time just getting a snare drum sound, while taking phone calls....but he told FANTASTIC stories. Meanwhile almost everyone who knew Gus loved him, myself included.

Photo after [fourth] (Chris covered in food with gravy looming) is as before.

The last picture [fifth] is Ray and Karen Jackson, (Jacka's ex-wife). I first met Karen in 1975 when I drove up for dinner at their home in rural Northumberland. My car got stuck in the snow even though it was 4 wheel drive. They had a new baby girl, Ruth, who was absolutely gorgeous (she still is). Opposite Karen was a chap who was supposed to be in charge of back stage tour security. Can't remember his name but the band thought he was useless.

That's it really. There must be lots of other photos around but I don't have them.